There are those in our community who go above and beyond; ordinary people who do an extraordinary amount of good with their time and talents. And for the most part, they do it without fanfare, applause or recognition.

These are the people who truly touch the hearts of Karen and Tom Falk,
co-chairs of the 2020 Annual Campaign for United Way of Metropolitan Dallas. 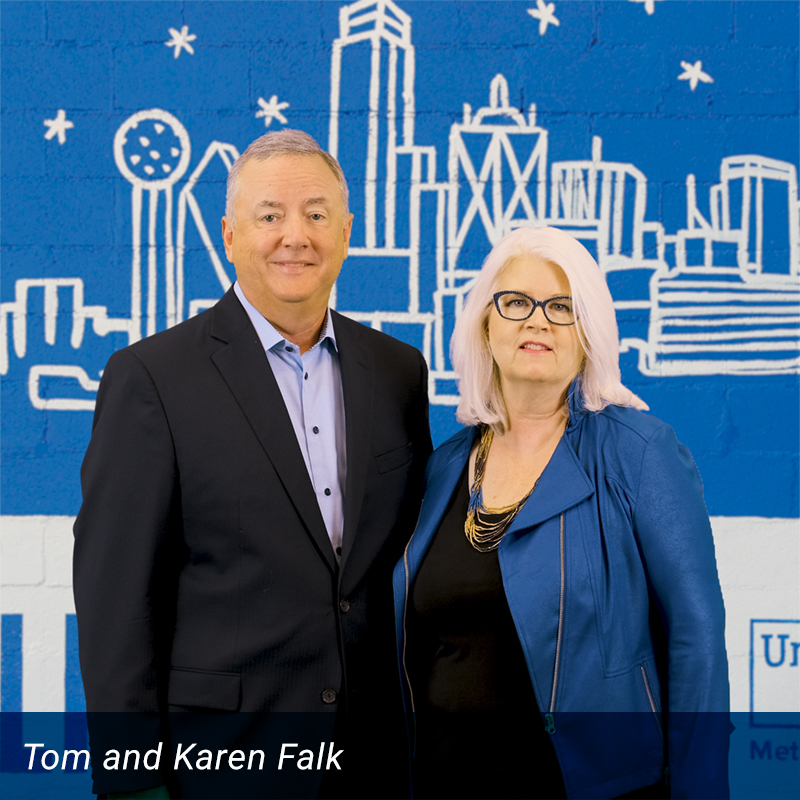 “The Dallas area is blessed to have many caring people who serve others in the community,” said Tom, Executive Chairman of Kimberly-Clark Corporation. “These heroes Live United every day and have inspired us by the impact they have made and the lives they have touched.”

Last month, Kimberly-Clark held their annual employee giving campaign. Employees from Kimberly-Clark’s world headquarters volunteered on their Day of Impact to serve meals, sort food pantry donations and assemble snack, supply and hygiene kits. In addition to actively supporting to our neighbors in need, Kimberly-Clark employees donated K-C products including toilet paper, paper towels and Kleenex. They also contributed of $25,000 to CitySquare to begin their campaign week. Karen Falk reflected on what it means to Live United.

“It’s about working together to create lasting change in our community,” she said. “And all these people are making it happen. They’re the doers and change-seekers who show up and make a difference and inspire others to do the same. They lead by example. And together, we can put opportunity in the hands of all North Texans.”

Here are a few notable examples.

Nine years ago, Southwick applied for and received several grants to rebuild Kramer’s Learning Garden. Today, she single-handedly continues to run the garden, volunteering three days a week to keep it growing.

“The garden isn’t just for the kids to enjoy at school,” said NNery Franco, one of the Kramer mothers. “The garden teaches kids how to eat right at school and the kids bring home what they learn. We eat better as a family because of it.”

All of Kramer’s 632 students visit the garden biweekly for a lesson that corresponds with the reading and writing they’re learning in the classroom. The students are also encouraged to try vegetables — carrots, cauliflower, kale, even kohlrabi, a wild cabbage with a turnip-like root — from the garden or fruit from the peach, pear and apple trees nearby.

In 2014, Kramer Elementary was selected to participate in the Healthy Zone School program partly because of its Learning Garden. A partner initiative developed by United Way of Metropolitan Dallas and the Cooper Institute, the Healthy Zone School program recognizes schools that create a healthy-conscious culture that improves academic performance and encourages habits for lifelong wellbeing.

“Every day our students are in the garden and learning about healthy eating,” said Principal Kate Walker. “They have an opportunity to dig in the dirt and taste fresh fruits and vegetables they grow – and it’s all because of Ms. Southwick. We couldn’t run this garden without her.”

“The kids mean a lot to me,” said Southwick. “Their health means a lot to me. We can do a wonderful job with academics, but we have to extend that to the whole being.”

Chris Young has volunteered with the United Way Free Tax Prep program since 2008. After a 31-year career, culminating as an executive vice president for a refreshment beverage company, he now enjoys using his skills and expertise to give back to the community.

“It’s giving back to people who can’t afford to pay for tax prep and getting them back the money they qualify for,” said Young. “And it makes sure that they don’t get in trouble with the IRS. Some people go to fly-by-night tax preparers who can make mistakes and then are nowhere to be found.”

Created in a partnership between United Way of Metropolitan Dallas, the IRS and Foundation Communities, the Free Tax Prep program has doubled in size over the last five years. Last year alone, more than 500 volunteers like Young donated over 13,000 hours as IRS-certified tax preparers and provided services to 12,000+ households, resulting in nearly $19 million in refunds and tax savings.

For Leslie Armstead, Lancaster mother of three, the experience was much better than the one she had years ago at one of the brand name tax preparation places.

“This time, the person preparing my taxes was actually telling me things — what I should do, what I should bring in next year, asking me about deductions I didn’t even know about.”

Armstead’s refund was substantially more than she expected. With it, she built an emergency fund and invested in savings bonds for her children. And for Young, it doesn’t get any better than that.

“It’s rewarding to be able to do my part to make Dallas a better place,” he says. “It keeps me busy. Through volunteering, we can all do something to make life better for everybody in our community.”

Tameka Caldwell loves knowing her work gives back to the community where she lives and her child goes to school.

For years, the Collin County resident worked in Child Protective Services and the foster care system. And she saw that home visiting services were not as readily available in her area as they were in Dallas County.

When she became a Program Manager at ChildCareGroup in 2015, Caldwell leapt at the opportunity to change that. Today, she oversees the Born Learning Parent Engagement Program, a nationally accredited home visiting program in Collin County and part of the Texas Home Visiting Program from United Way.

“Like they say, it takes a village,” says Caldwell. “I look at this work as being a part of a family’s village. There are so many families who are new to the area or new to the country and don’t have a lot of support, so our program comes alongside those families and provides that support for them.”

The program gives parents the tools and skills to be their child’s first and best teacher. Parent Educators make weekly or bi-weekly home visits to model positive parenting skills and educate parents about their child’s developmental level, next milestones and activities to encourage growth.

This free service addresses the needs of the whole family — the early development of children and the economic, health and social progress of their parents — providing educational activities, training and other resources for parents and children, with the goal of ensuring the success of both.

“This work is rewarding because there’s partnership with parents who want to know more about how to be their child’s first and best teacher,” said Caldwell. “To see those AHA! moments for parents, who have been consistently reading to their children and see their language skyrocket. It’s rewarding.”

How you can Live United

United Way leads the charge to strengthen education, income and health—the building blocks of opportunity—right here at home. To join the movement and be part of the change, give, advocate or volunteer today.

Our website uses targeted advertising cookies to offer you a better-personalised experience. By continuing to browse the site you are agreeing to our use of cookies.I agree